Glimpses of the past 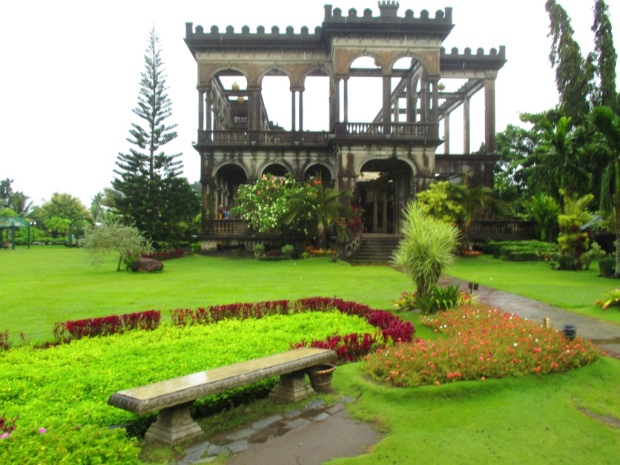 This was my request to the driver of the Ceres bus we took from Bacolod’s North Terminal, Monday morning, the second day of my Negros trip with one of my best friends. We got to the terminal by taking the Mandalagan-bound jeepney along Lacson Street, Bacolod’s main road!

My friend and I really didn’t have any idea on how to go to Talisay, the nearest city north of Bacolod and before Silay City, and how to get to the places we want to see that day, the Balay ni Tana Dicang and The Ruins, two of Negros’ famous ancestral houses. We thought that the best way to do it would be to go the center of the town, ask around, and take it from there.

More than 10 minutes after we left the North Terminal, our bus stopped at a school along the highway, and the driver told us we are in Talisay! We got off and saw several tricycles parked at the curb side. We approached the first one in line, and asked the driver if he could take us to The Ruins. We agreed on a price, Php 100, to take us there, but since he was nice and there are other places we would like to see, we ended up renting his tricycle for the trip around Talisay, for Php 500.

Manong’s tricycle sits two people in the front side, and two in the backside (though it would really be a tight fit), and one can sit on the motorcycle itself behind the driver. It was okay. I have tried the habal-habal before in Bukidnon and Siargao Island, and that one, you had to hold on to dear life!  With my friend on the front side, and me in the back as I wanted to take pictures along the way, we started our adventure. We went back to the direction we took on the way to Talisay from Bacolod, bore off leftward towards the direction of the sugar cane fields and a new subdivision development at the start of it, near the main road.

The green signage on the left leads to the entrance of The Ruins!

I have seen photos of The Ruins but I was not prepared for the view that I will see after passing through fields and fields of sugar cane for about 10 to 15 minutes. We turned left before that tall structure above and I caught a glimpse of my first Negros ancestral house! One word for it, amazing!

We paid the Php 95 each entrance fee, and just stared for a while at the beautiful sight before us. Even if the weather was a bit gloomy when we set off that morning, the first glimpse of the house was like a ray of sunshine to us! 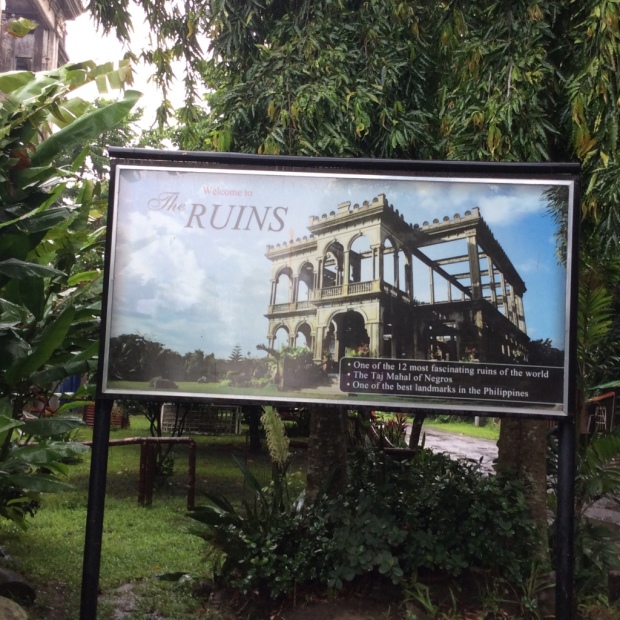 The Ruins is open from 8AM to 8PM

The Ruins or the mansion built by the sugar baron Don Mariano Ledesma Lacson in loving memory of his wife, Maria Braga, maybe just a shell of its former self now, but looking at it you can still see traces of how beautiful and grand the house must have been. Still standing tall, proud and beautiful, overlooking the vast area around her, as she had done for about a century now, she is like a queen, very regal despite the ravages of war, and time!

Still in awe, we entered the house reverently through its, still, grand entrance, and started our journey to the past. 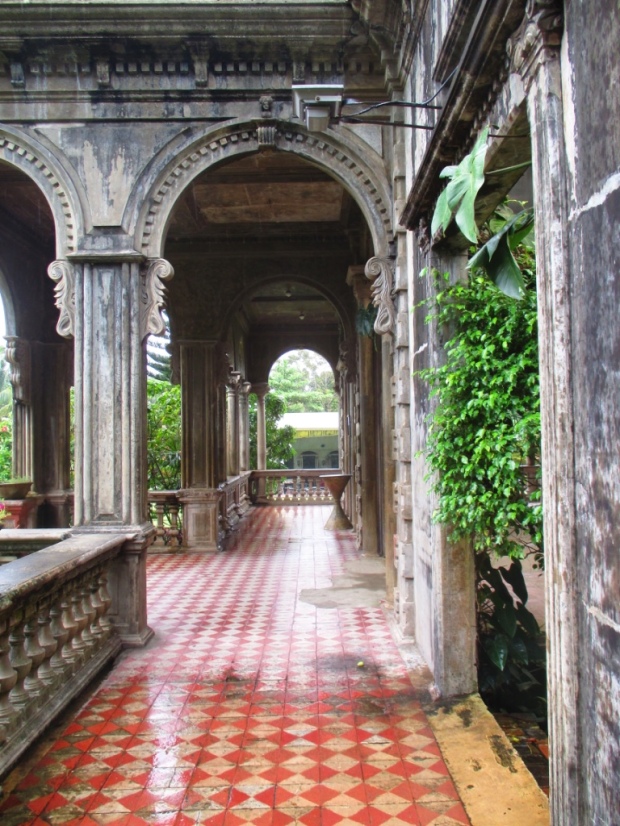 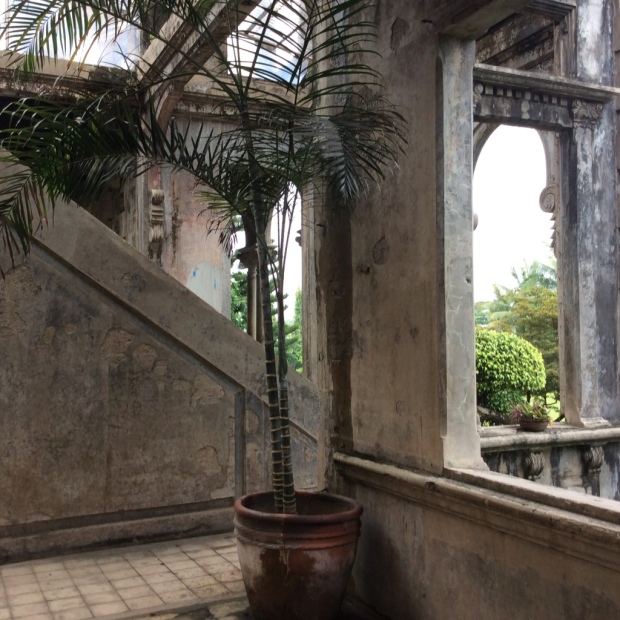 View of the fountain from inside the house

The garden of the house is also very beautiful and the grounds, extensive.

If the fountain area below looks familiar, you must have seen it in the Liza Soberano-Enrique Gil movie ‘Everyday I love You’. Remember that scene where Enrique said the ‘I love you, I love you’, I love you’ line while Liza was filming him? Another scene, between Liza and Gerald Anderson, was also filmed at The Ruins. 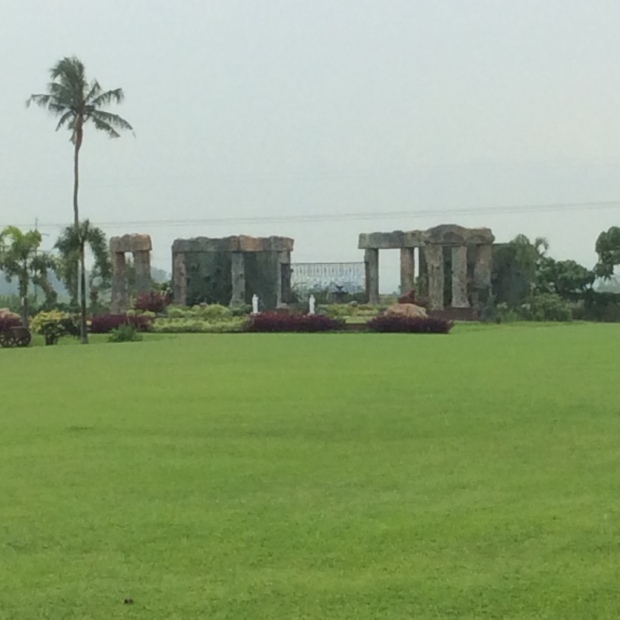 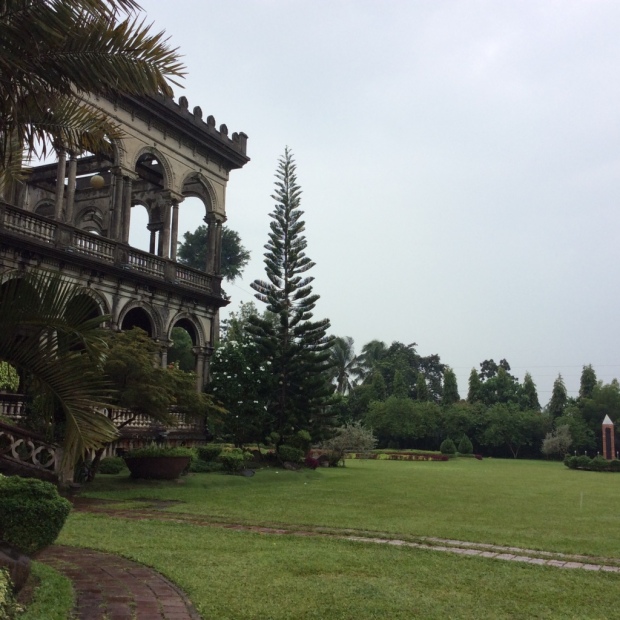 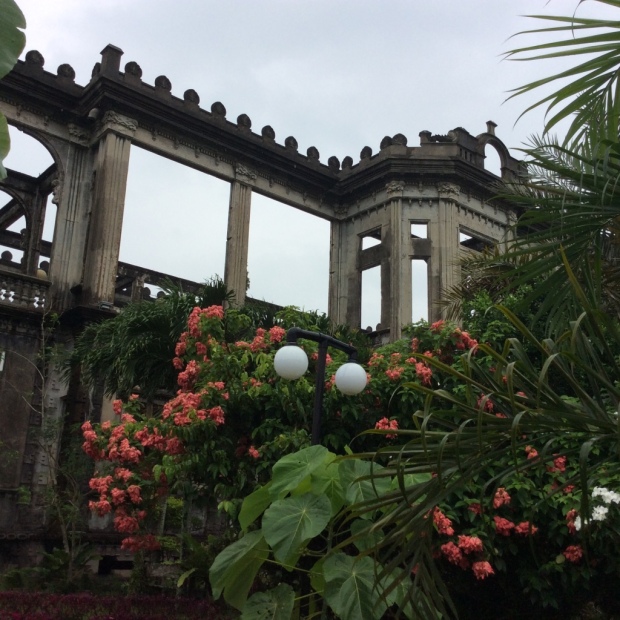 We left the place feeling happy. My friend mentioned that the place exuded positive vibes. 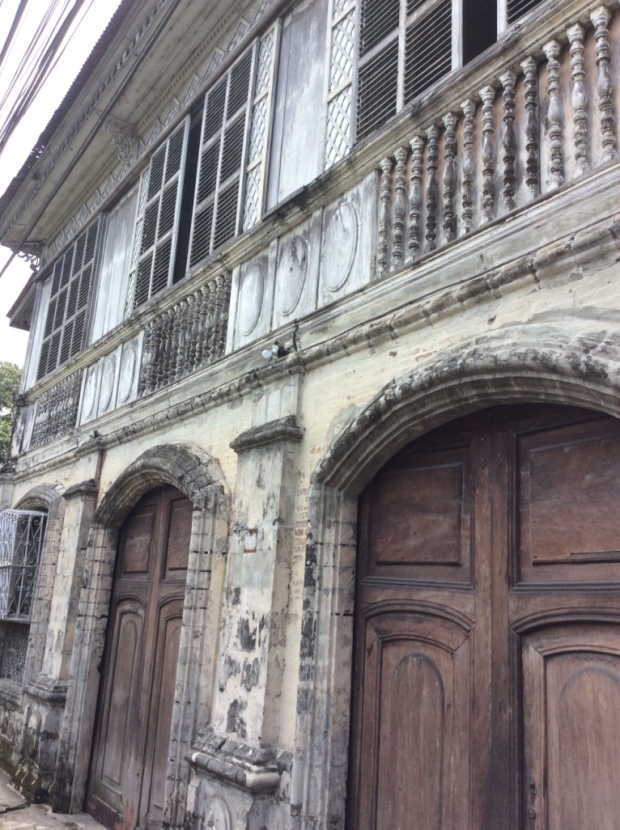 With our heads still full of the images of The Ruins, we boarded our tricycle again, and the driver took us back to the city for our next ancestral house, the Balay ni Tana Dicang, the house of the Alunan-Lizares family which was turned into a lifestyle museum. It was actually the first one we went to as it is nearer, but it was still closed when we arrived there. The museum is open from 10AM onwards.

Not noticing the bell outside, we knocked on this sturdy wooden doors!

We paid the Php 100 entrance fee for adults (Php 20 for kids) and we started touring the beautiful bahay na bato built in the latter part of the 19th century for Don Efigenio Lizares and Doña Enrica Alunan.

It was lovely sitting by that window and having a photo there!

The ground floor or the silong of the house!

The beautiful caroza used in religious processions is parked under the magnificent staircase of the mansion.

Being in this house, I really felt like I entered a time machine and arrived in Spanish-era Philippines.

The house looks unchanged through the passage of time. When you reach the top of the stairs, you’ll have the feeling that the lady of the house in her finest clothes will come forward, and welcome you to her magnificent home (similar to a scene in the classic movie ‘Oro, Plata, Mata’).

Of all the Philippine ancestral houses that I have been to,  so far, this is the grandest and the most preserved one I have toured! 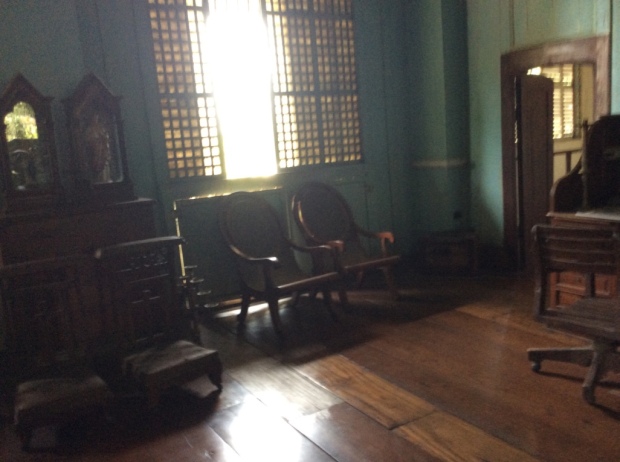 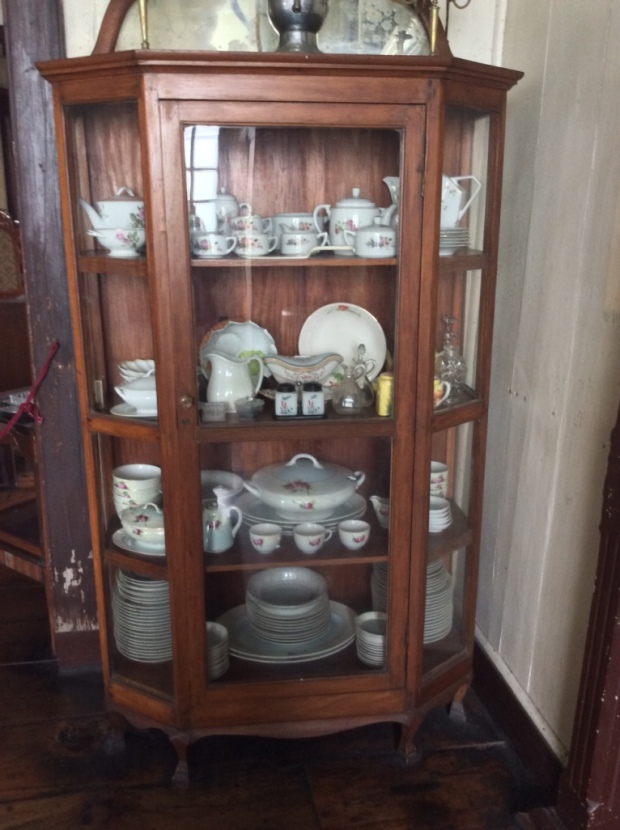 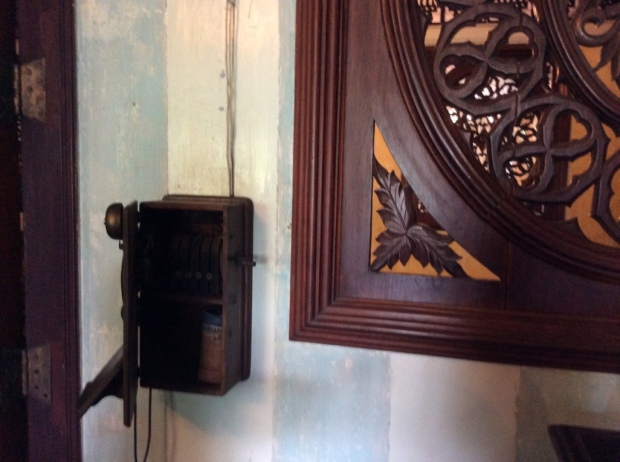 It was a wonderful experience walking around the magnificent home and getting glimpses of how the family had lived in their very interesting times. 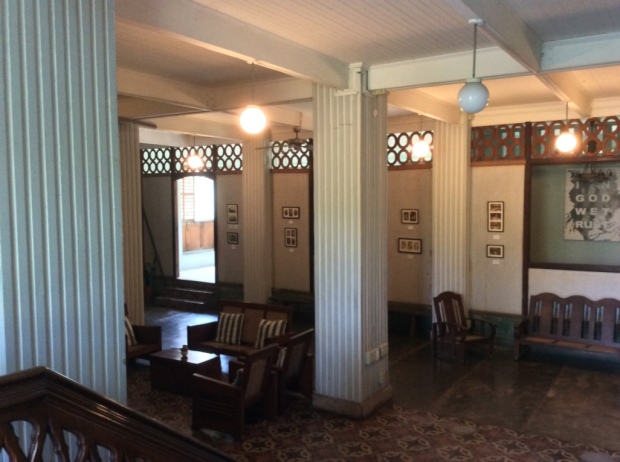 We asked our driver to take us also to the Talisay Church, as aside from ancestral houses, I also make it a point to visit beautiful, old churches in the places that I have been to!

Our last stop was a restaurant so we can have lunch before we travel back to Bacolod. Our driver brought us to this place. We thanked him as we parted ways. It was a wonderful, and indeed, a very different experience touring Talisay in his tricycle! 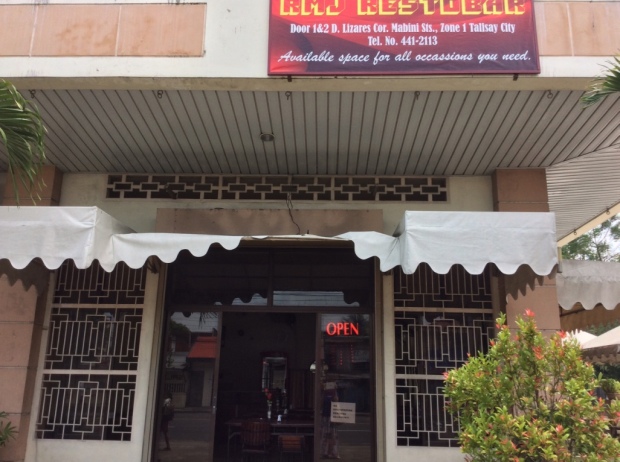 These much delicious food, and drinks, cost us only around Php 500. We were even unable to finish everything! Too much for our tummies! 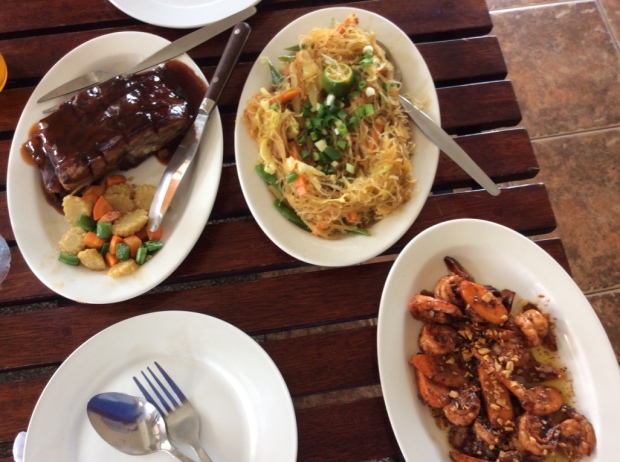 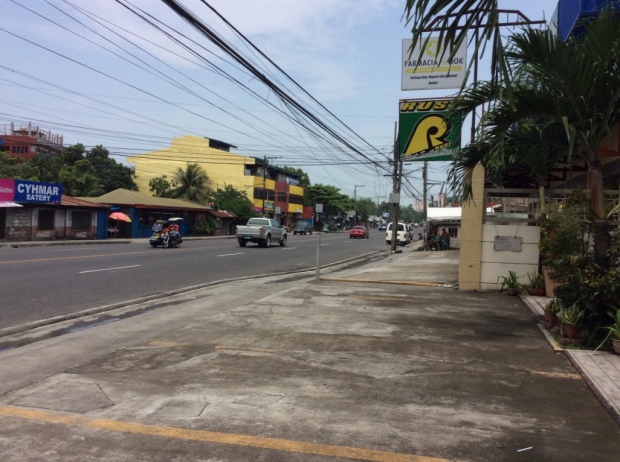 We crossed the street, and flagged a Bacolod-bound jeepney. As Talisay receded from our sight, the experience of having stepped back in time, lingered.

• Please find below scanned copies of the leaflets I got on both houses for additional information about these beautiful places. You can also click on this link for Balay ni Tana Dicang  and this link for The Ruins.

The flyer contains information on how to go there, which is different from the one we have taken. I have seen jeepneys in Bacolod with ‘Bata’ signage, the jump off point for this direction. I also saw a sign at the street corner going to that direction which says The Ruins, and that was after we took the trip to Talisay. Anyway, as we would like to see a bit of Talisay also, we were happy with the route we have taken.

•  If you would like to know more about Philippine ancestral houses, you can get this book. It is a bit pricey at Php 1,500, but worth it. I bought the book at National Bookstore. Balay ni Tana Dicang was among the heritage houses featured in this beautiful book. It also has a list of Heritage House-Museums you can visit, at the back pages, with brief descriptions, opening hours, addresses, and phone numbers!

•  For the Bacolod side of my trip, please click on this link. Next travel post, the ancestral houses of Silay City, Negros Occidental!

This entry was posted on December 10, 2015, 1:44 PM and is filed under Information, Interests, Travels. You can follow any responses to this entry through RSS 2.0. You can leave a response, or trackback from your own site.