Getting fit by the bay

Of all the malls in the metro, the SM Mall of Asia in Pasay City, popularly called MOA, is the least one I go to because it is a bit far from where I live. The one time I was in the mall to attend a friend’s baby’s baptism party in one of the restaurants fronting the bay, I did find the place quite interesting with tons of shops and restaurants.

However, it is also pretty huge! It was tiring to walk around with a kid who refused to walk anymore due to the vastness of the mall. Kiddie carts for hire saved the day. I thought of checking out the amusement park in front of SM MOA with my little one, though. Something I haven’t done until now. 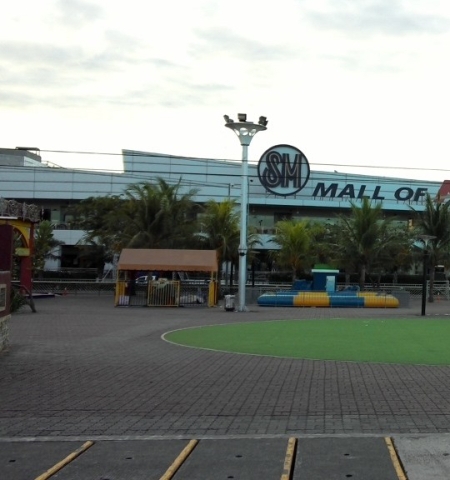 Recently, I discovered that there is another attraction in the SM MOA Complex. The area in front of the mall, SM by the Bay, is a popular place for those who want to get fit or people who likes to be in an open space within the city with a view of the sea, and relax a bit.

The area was filled with joggers that morning, as well as bikers and people, like me, who only prefers to walk around briskly to shake off those body fats, exercise the heart, and clear the head. 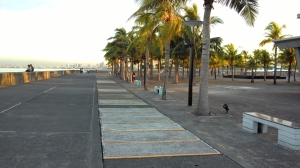 The early morning view from the bay was very relaxing. At one point, though, a not so nice smell wafted into the area, brought by the wind, but it was not enough to distract or dissuade me from soaking the beautiful and relaxing view as I walked back and forth along the sea wall that, sort of, fenced the place. 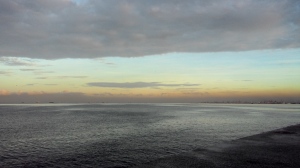 I discovered that you can also take a ferry ride around Manila Bay at sunset from this area. Hmmm, something to take a closer look at, too! 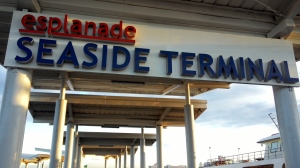 SM By the Bay also full of restaurants and small food kiosks, aside from the rides scattered at one side of the area, which includes a giant Ferris wheel. Some of the kiosks were opened even at early morning but when we checked out the Starbucks we saw while brisk walking, fervently wishing for a cup of very hot coffee, we found out that it will open around noon!

Sitting cross-legged on the seawall with a steaming cup of coffee after a vigorous morning exercise would have been heaven, but it was equally so with a cold bottled water and a hot dog sandwich!  With all the restaurants there, it might be worth checking it out in the evening. I have to do that next.

We ended up having coffee and breakfast at the Starbucks in Harbour Square at the CCP Complex, an area very much familiar for Be Careful of My Heart fans like me. While drinking my caffe americano, I thought of the scenes in the show wherein Sir Chief and Maya were walking in the area, as well as at the other side of the seawall in the CCP Complex.

Maybe, it was the reason I finally remembered that I have been meaning to buy sunflowers!  So on the way home, I passed by Dangwa in Sampaloc, Manila and bought two sunflowers in plastic containers.

It was a great morning, indeed.